About "The Wolves of Little Mouse Valley"

'The Wolves of Little Mouse Valley' is set in mountainous and forested Umbria, central Italy. It reflects the way of life of a rural community which prizes truffles, olive oil, home-grown vegetables, hardy women and fidelity. It contains an element of fantasy in its depiction of a powerful population of wolves.

The wolves control the wild boar which in turn are a danger to the valued truffle harvest. They have a long-standing relationship with the family at the core of the story, having created an unbroken chain of wolf boys who are initiated into the ways of the wolves once they are a certain age, or when they reach a point of danger in their lives at which the wolves' help is needed.

The latter is the case of orphans in a notorious monastery which the wolves are instrumental in overturning as being corrupt and cruel even in its apparent blandishments. The wolves are moral beings which arrive on the scene as a force for good, and melt away when they are no longer needed.

'Little Mouse Valley' is the literal English translation of 'Valtopina', the village which, fictionalised, serves as the backdrop for much of the story.

With thanks to Peter Fischer - Papafox (via Pixabay) for the photo. 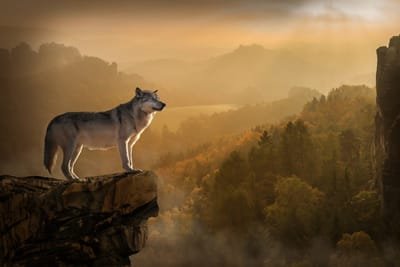