Kate's father-in-law Derek is careless of the feelings of others and has a black sense of humour. He is the cause of much embarrassment at the christening which he has just attended.

Kate and Mike, just behind her, were shepherding Derek along as if he were a small, laggardly boy. Given half a chance, as Kate explained in an aside to Violet, he would be off round the churchyard hunting for the most cryptic and affection-less epitaph that he could find, because that sort of thing amused him. 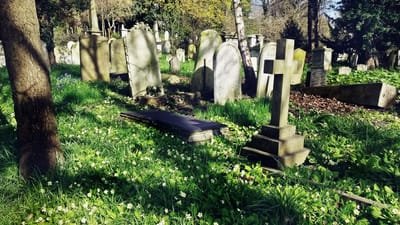