The forgotten village of Vortigern's Glen

I plunged down the steeply twisting track
Between the weather-pitted boulders
And the pine trees that the wind bends back
From the sea, while over my shoulders
The mist-enveloped mountain peaks seemed
To hang, brooding. Then the path swung round
And the sea, like a fish’s scales, gleamed
Silver before me, and I had found

The village. A few huddled houses
It was, with grass down the tiny street
Where stealthily the stray sheep browses,
And treads the rubble with cautious feet.
In the blank, grey walls the windows gaped
Likes sightless sockets. Elder trees clung
By the doorways, stunted and storm-shaped,
Bowed as if old, when they were still young.

Those wind-scoured dwellings breathed disaster;
The blind windows spoke of tragedy;
And so I left, and climbed up faster
Than I had come, and it seemed to me
That the stream’s faint, murmuring laughter
Mocked me, and the gliding gull’s harsh screams
Were of a ghost that followed after,
And for nights it crept into my dreams. 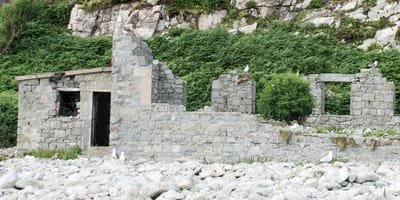