Published in The Writers' Magazine Issue 1

It was an impulse less of hope
Than of atonement.


He scattered boots and socks, and slammed
His thighs against a wall of water.
The bottom swooped away. The loch
Swallowed him: chest and shoulders,
All but his head, without a ripple.
He swam frog-style, jacket billowing,
Carved the green surface with his hands,
Homed in on the floating blob of fleece.
He clutched the wool and tipped
The narrow face up, into air.


Yellow eyes stared back at him.
He grasped a corrugated horn and turned
For shore, swimming with one arm,
Pulling, floundering, believing,
Shouting, urging his feet to touch
The pebble floor. The loch spat him
Out on his knees, with clothes that weighed
As much as what he'd salvaged.


He laid the dainty head
On stones, as on a pillow, and felt
For this dead sheep the tenderness
His dog - for now - had lost the right to. 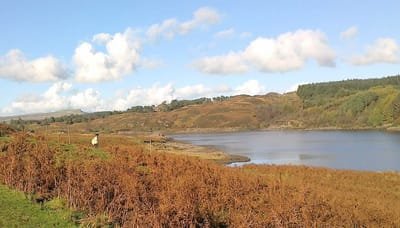